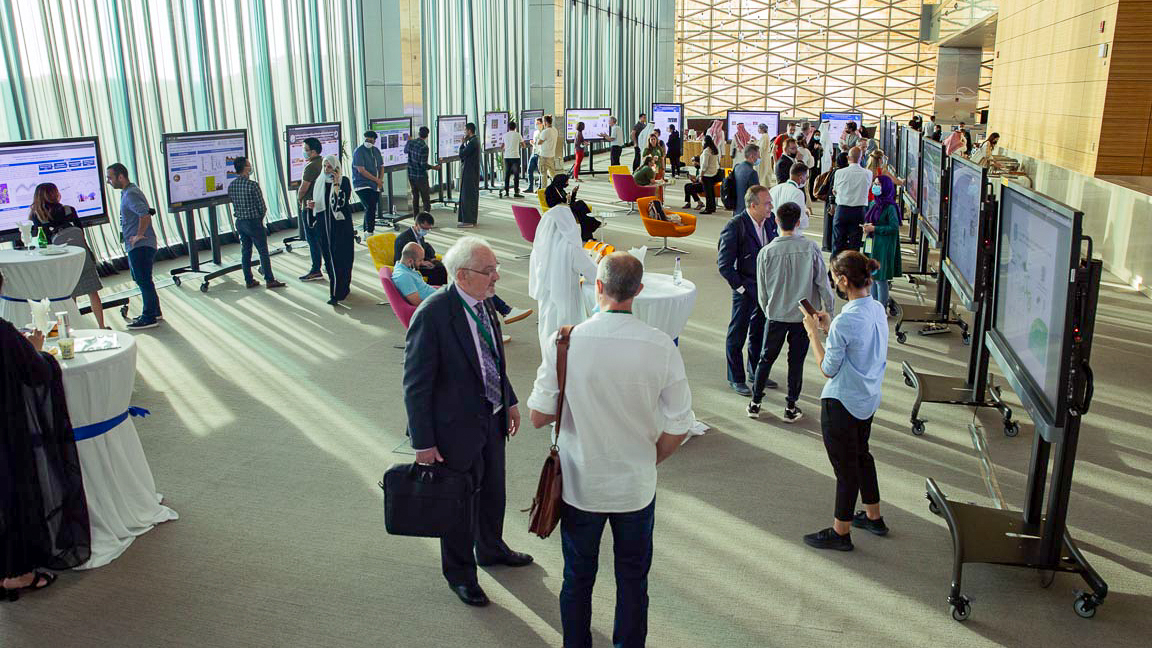 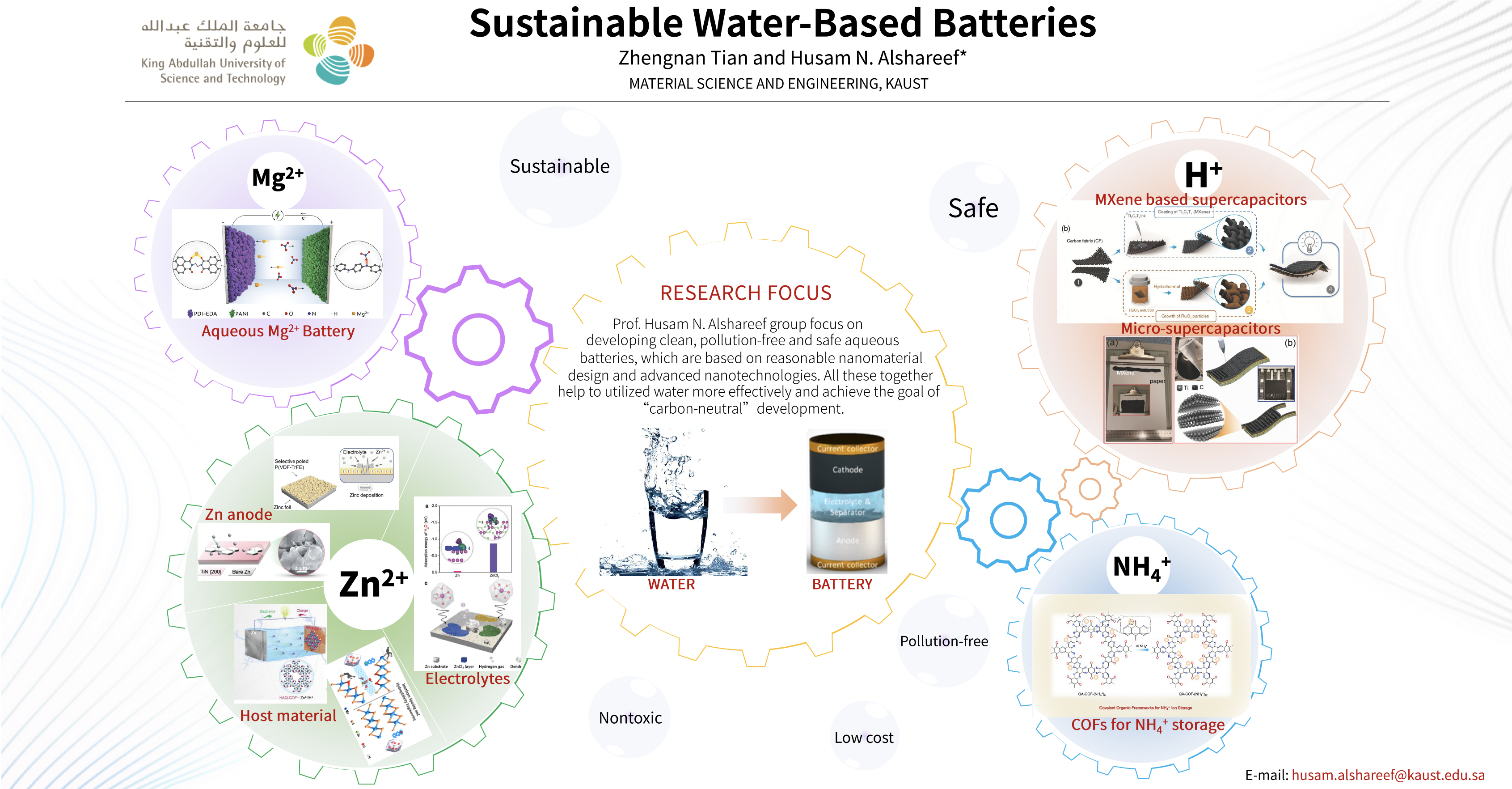 Prof. Husam N. Alshareef group focus on developing clean, pollution-free and safe aqueous batteries, which are based on reasonable nanomaterial design and advanced nanotechnologies. All these together help to utilized water more effectively and achieve the goal of carbon-neutral development. 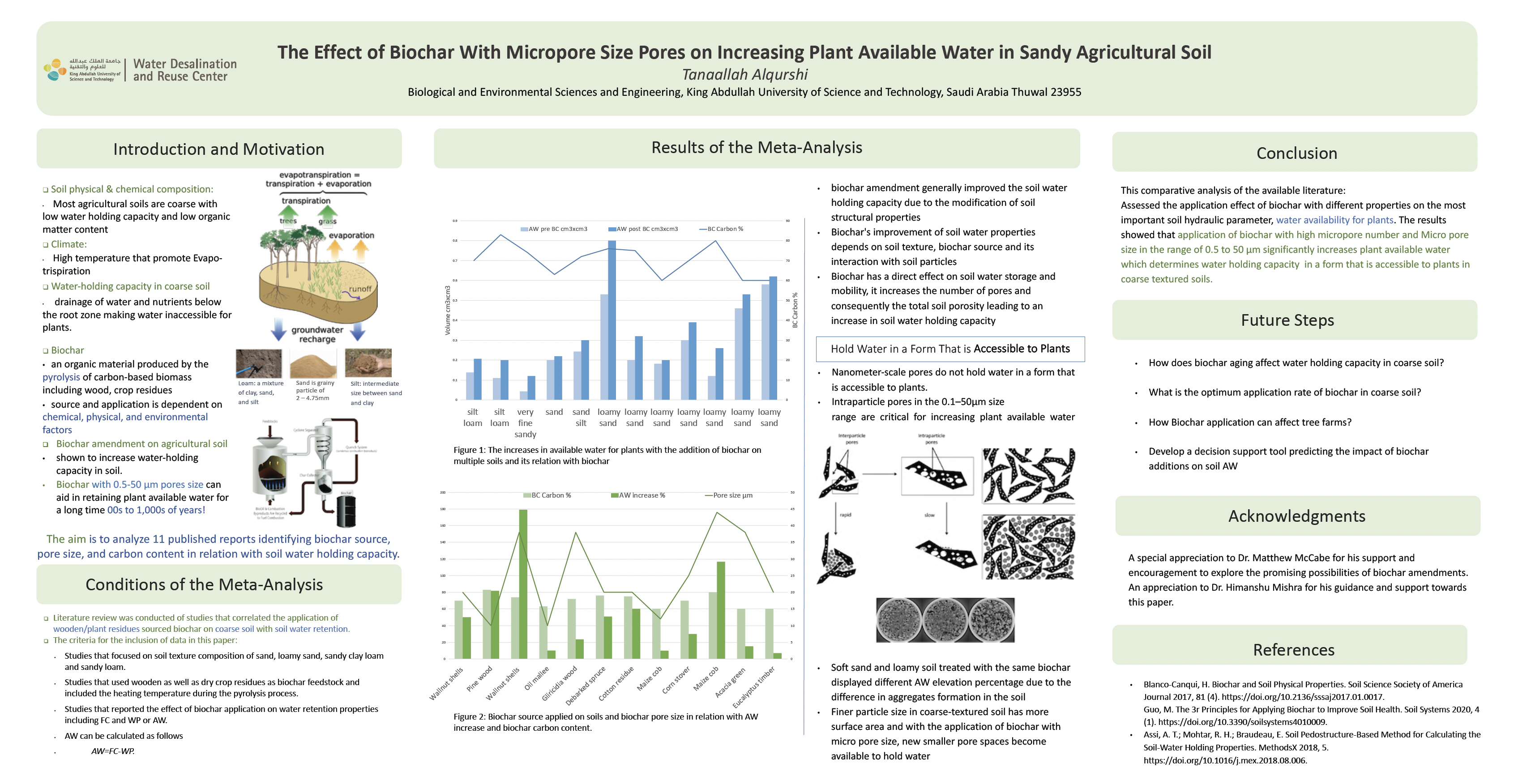 Biochar amendment on agricultural soil was shown to increase water-holding capacity in soil. Biochar with 0.5-50 ?m pores size can aid in retaining plant available water for a long time.In Saudi Arabia, soil has sand composition up to 30%, which promotes water infiltration. A clear quantitative consensus on the specific attributes of biochar particles pore size on soil moisture-holding capability is lacking. Here, published reports measuring biochar pore sizes in relation with soil water holding capacity, namely plant available water, are reviewed.The literature review was conducted of studies that correlated the application of wood residue sourced biochar on coarse soil with soil water retention. The criteria for the inclusion of data were:

- Reported effect of biochar application on water retention properties including field water capacity and wilting point or plant available water. The results of the literature review showed that biochar with 0.5-50 ?m pore size increases the total soil porosity leading to an increase in plant available water. Finer particle size in coarse-textured soils has a larger surface area and with the application of biochar with micropore size, new hydrophobic pore spaces become available to hold water.

This comparative analysis of the available literature assessed the effect of biochar with different properties on the most important soil hydraulic parameter, water availability for plants. The results showed that the application of biochar with a high micropores size and fine particle size significantly increase available water 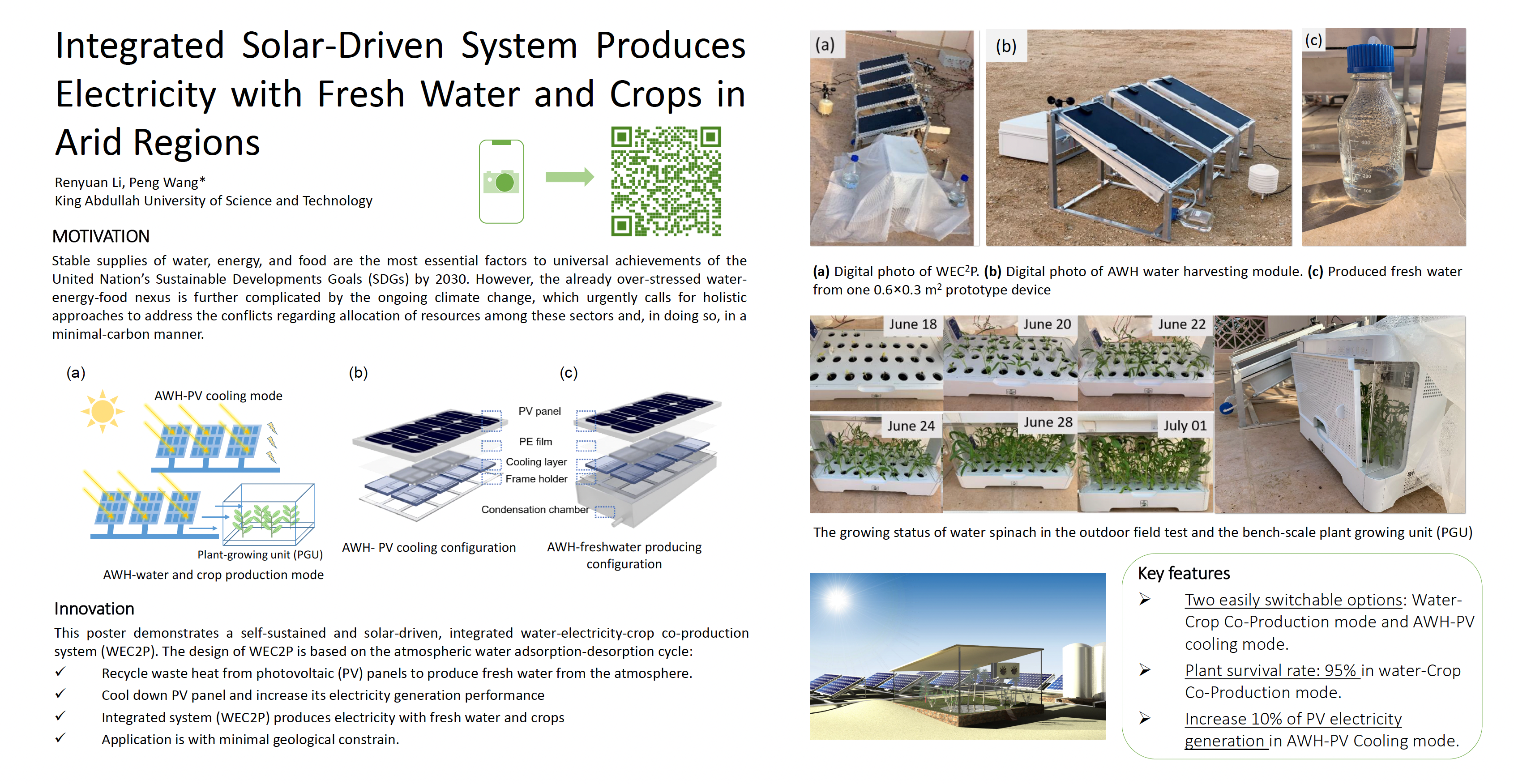 Stable supplies of water, energy, and food are the most essential factors to universal achievements of the United Nation s Sustainable Developments Goals (SDGs) by 2030. However, the already over-stressed water-energy-food nexus is further complicated by the ongoing climate change, which urgently calls for holistic approaches to address the conflicts regarding allocation of resources among these sectors and, in doing so, in a minimal-carbon manner. This poster demonstrates a self-sustained and solar-driven, integrated water-electricity-crop co-production system (WEC2P). The design of WEC2P is based on the atmospheric water adsorption-desorption cycle (1) to generate cooling power for photovoltaic (PV) cells to increase their electricity generation performance or (2) to sustainably produce fresh water from atmospheric water vapor to support crop growth. On the other hand, since conventional liquid-phased water resources are no longer an obstacle, the deployment of WEC2P is with the minimal geological constrain. Thereby, such system has the potential to facilitate the achievement of the SDGs as it provides a promising solution to decentralized water, electricity, and crop production suitable for arid- and semi-arid regions and beyond. It thus represents a meaningful contribution to the global water-energy-food nexus. 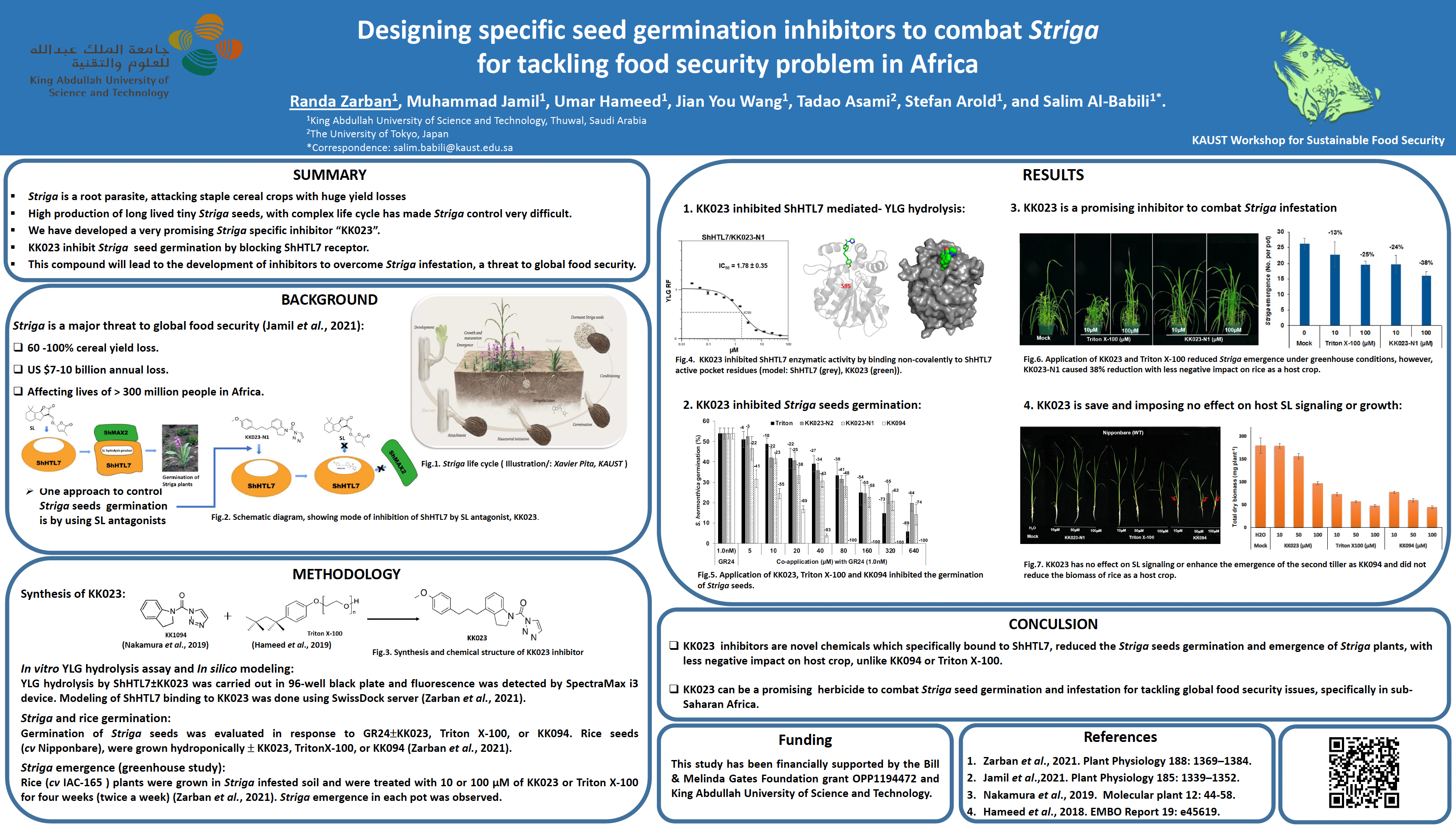 Striga hermonthica is an obligate root parasite that infests staple crops in sub-Saharan Africa, the Middle East, and parts of Asia. The Striga has become a major threat to global food security, exacerbating hunger and poverty in many African countries. Striga is affecting the lives of more than 300 million people and causing up to 90% yield losses with a value ranging up to US$ 10 billion annually. Striga plant produces a strikingly high number of long-lived seeds that germinate by sensing host-derived germination stimulants, mainly strigolactones (SLs). One of the salient tactics to reduce Striga infestation is the employment of SL antagonists, which can potentially inhibit Striga germination. In this present study, we highlighted the design and development of two inhibitors, KK023-N1 and KK023-N2. We demonstrated how KK023-N1 and KK023-N2 antagonized the SL signaling perception in Striga via specific binding to an SL receptor, ShHTL7. Furthermore, the application of KK023-N1 on artificially infested rice pots resulted in a 38% reduction in Striga emergence, which was better than the Triton-X100, a specific ShHTL7 inhibitor. Our findings will shed light on the future developments of inhibitors to overcome Striga infestation, a severe threat to global food security. 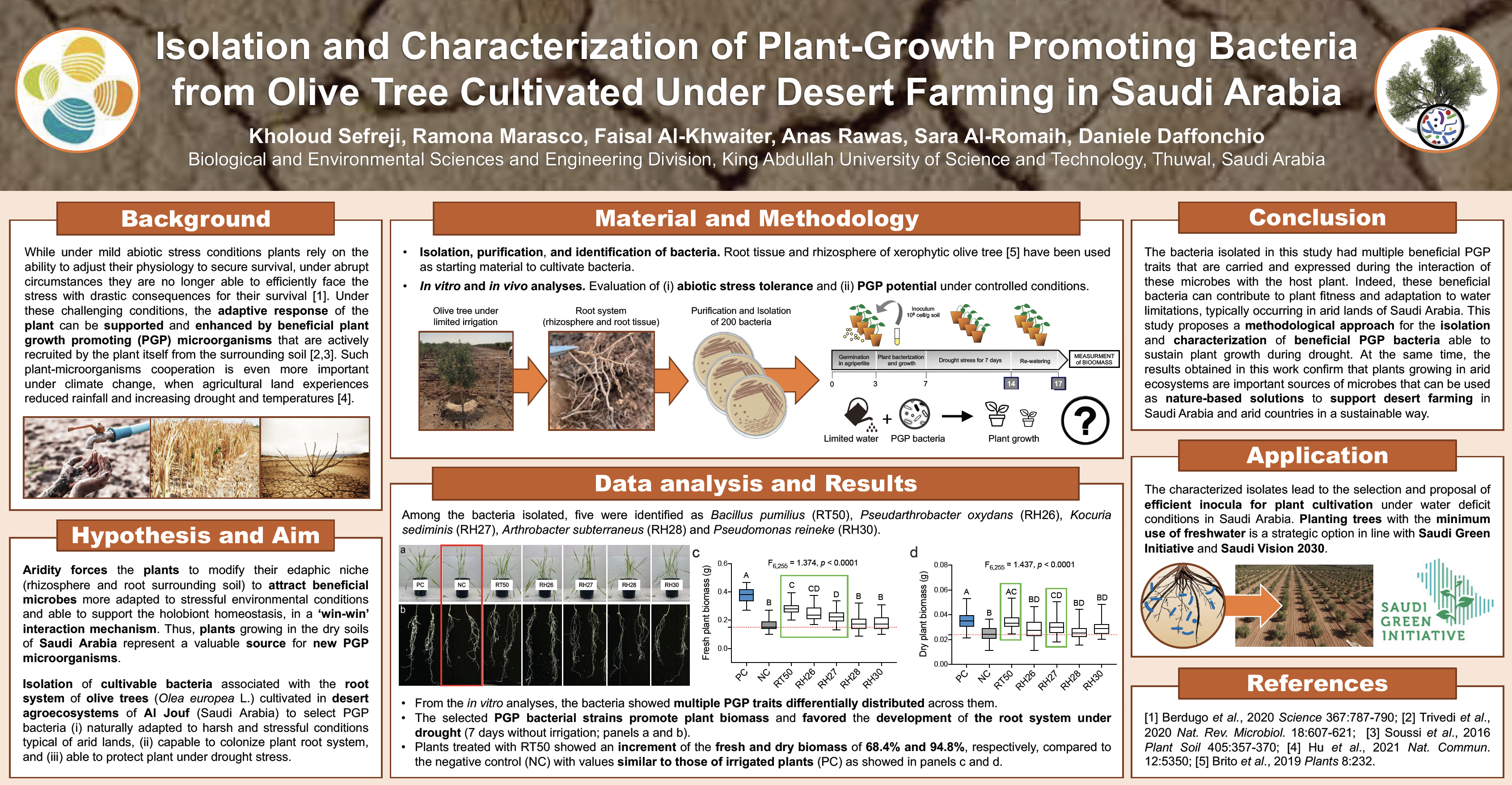 Global warming and the rapidly growing world population are among the most serious issues that threaten global food security. A new approach to support crop productivity in a sustainable way is the exploitation of beneficial microorganisms that live in association with plants. These microorganisms have the ability to induce tolerance to stresses, such as drought and salinity, and found inhabiting places where these stressful conditions are present, such as deserts and arid lands. Thus, plants growing in the dry soils of Saudi Arabia represent a valuable source for new biofertilizers and biopromoters microorganisms.

In this work, I characterized the plant growth promoting (PGP) potential of bacteria associated with the root system of olive trees (Olea europea L.) cultivated applying desert farming practices and reduced irrigation in the Al-Jouf region of Saudi Arabia. Since the aridity-resistant plant selected and its cultivation conditions, I expected that the olive root system recruit bacteria carrying multiple PGP traits involved in the protection of plants under drought. In the laboratory, rhizospheric and endophytic bacteria were isolated and purified. The bacteria showed multiple PGP traits, including production of exopolysaccharides and auxin capable of increasing soil water retention and promote root growth, respectively. Among the selected bacteria, we found one strain able to protect plant from prolonged drought (7 days), enhancing fresh and dry biomass of plant of 68.4% and 94.8%, respectively. These results confirmed that plants cultivated in arid ecosystems represent an important reservoir of nature-based solutions for developing sustainable desert farming in Saudi Arabia and arid countries. 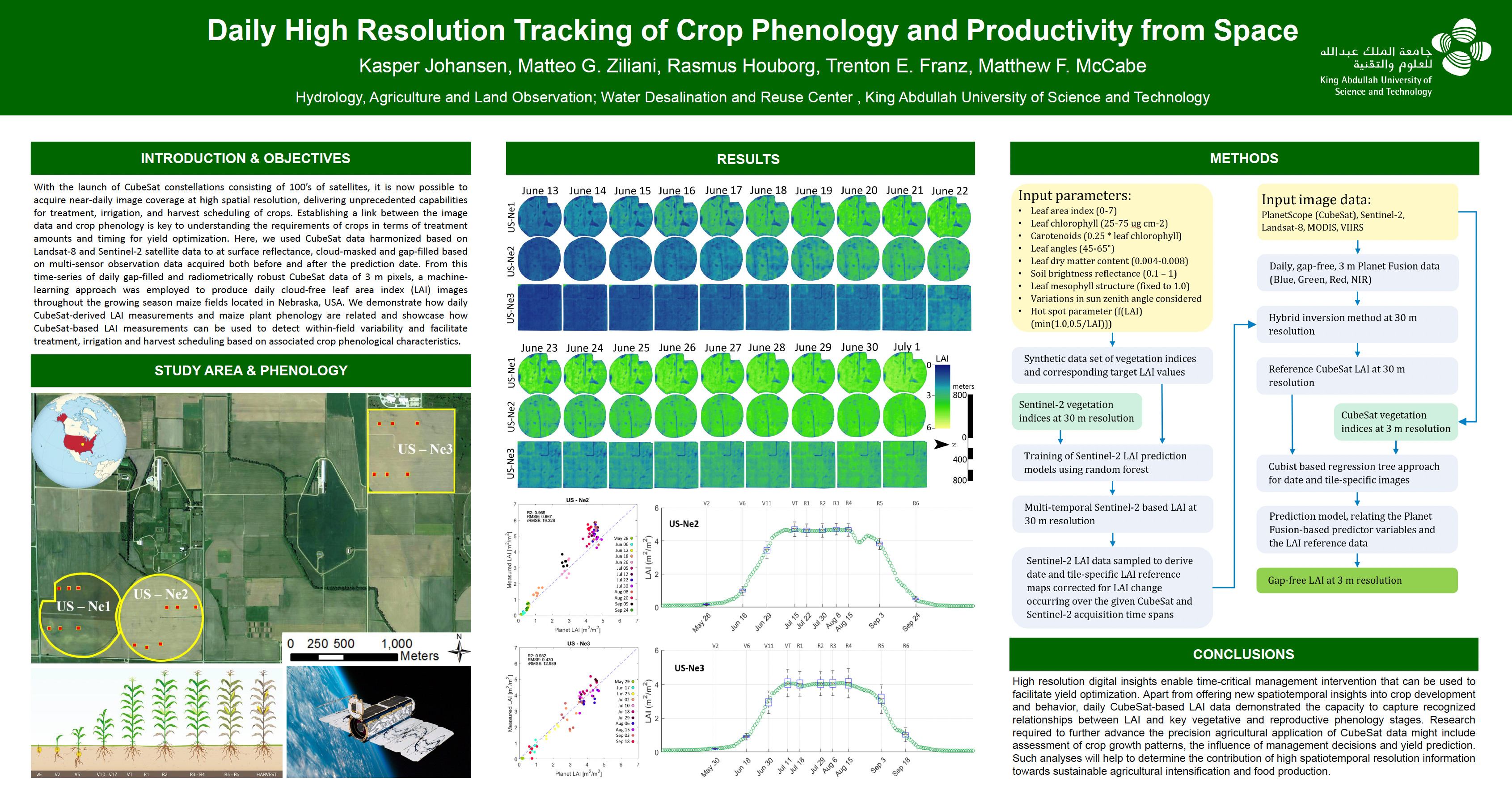 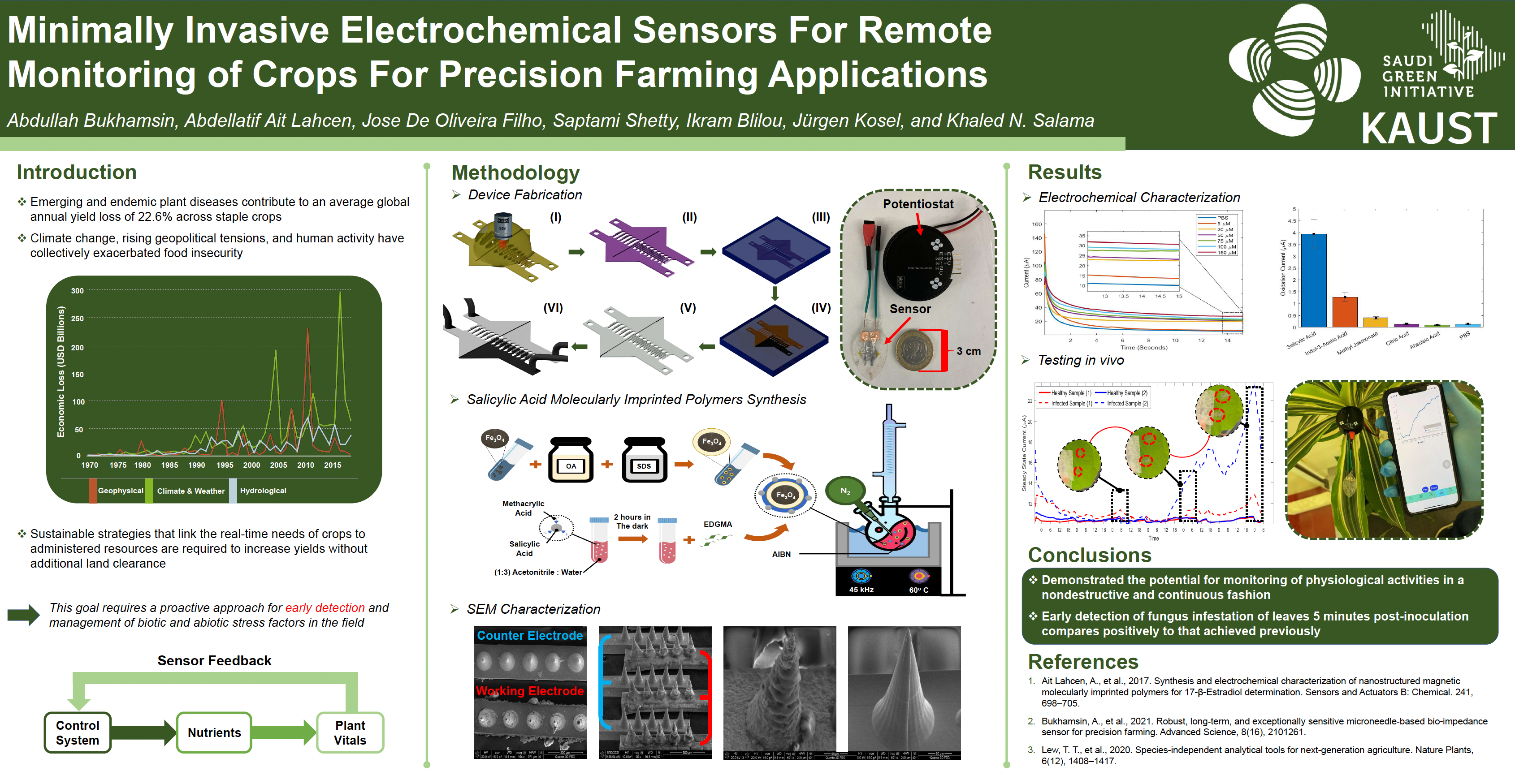 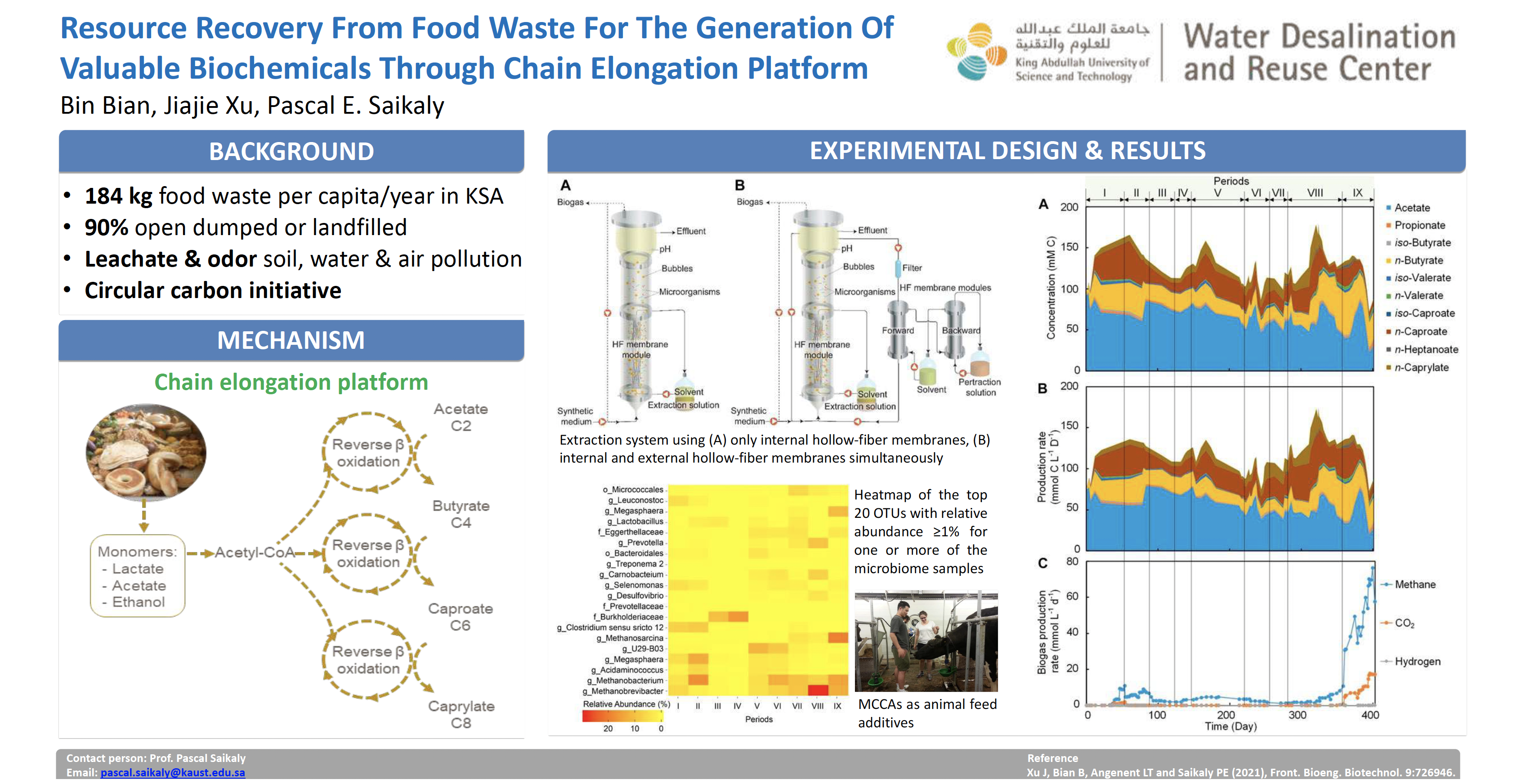 Food waste is commonly produced in large quantities from household kitchens, animal husbandries and food processing, which is commonly landfilled in Saudi Arabia and has severe environmental impacts (soil, water pollution, odor and greenhouse gas emission). The high-organic composition of this waste stream can represent a valuable source of energy using traditional anaerobic digestion (AD) technology to convert biodegradable organic waste into methane-rich biogas and nutrient-rich digestate, involving various microbial reactions. The economic benefit of AD is, however, sometimes questioned because of the relatively low price of methane in biogas generated, the high cost for construction, and operation and management of the biogas facility. Therefore, to extract more from high-organic waste streams, and thus enhance waste valorization, alternative technologies are emerging such as chain elongation. In this study, we utilized this open-culture biotechnology platform to produces medium-chain carboxylic acids (MCCAs, C6-C12), from heterogeneous low-value waste streams through anaerobic fermentation. MCCAs are commonly used as valuable biochemicals for various industrial applications, such as sustainable antimicrobials, biopolymer production, livestock feed additives for growth, or precursors for liquid biofuel production, and thus enjoy a high market price and promising scale-up potential. 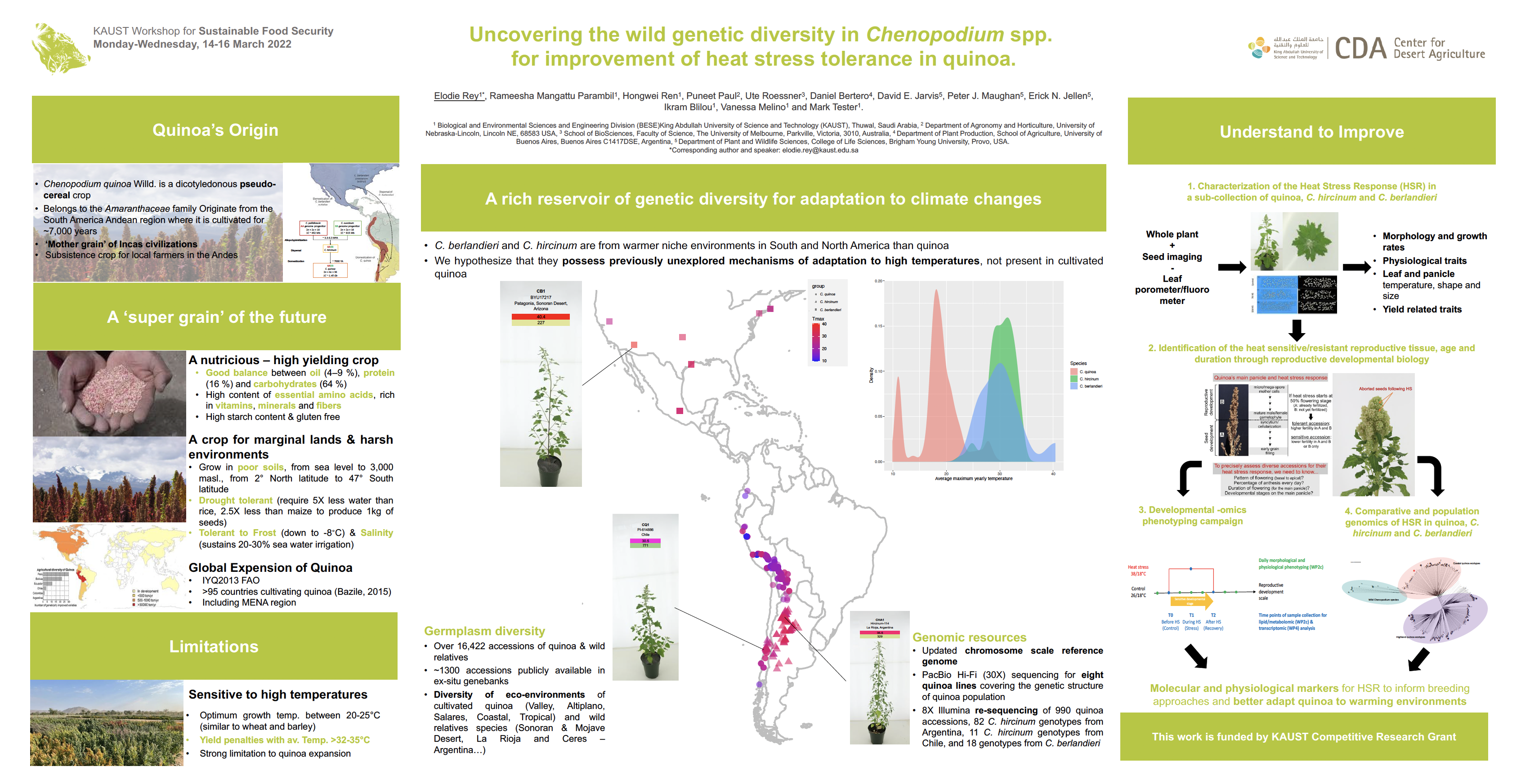 Uncovering the Wild Genetic Diversity in Chenopodium Spp. for Improvement of Heat Stress Tolerance in Quinoa

Quinoa (Chenopodium quinoa Willd.), is a semi-domesticated, pseudo-cereal crop that originated in the Andes. Due to the exceptional nutritive value of its seeds, ability to be grown in poor soils and tolerance to several abiotic stresses (including drought, salinity and frost), quinoa has gained increasing interest worldwide and in the Arabic Peninsula. Yet, quinoa performs poorly in environments where temperatures reach above 35°C, which represents a major threat to the production in its native environment, and a major limitation on the expansion of quinoa as a major crop beyond the Andes in the context of climate changes.

We are exploring heat stress tolerance mechanisms in the North- and South-American wild relatives of C. quinoa, namely C. hircinum and C. berlandieri respectively, in order to improve the resilience of quinoa to high temperatures during reproductive developmental stages. Quinoa wild populations originate from some of the hottest environments in South and North America, hence we hypnotize that they possess previously unexplored mechanisms of adaptation to high temperatures, that are not present, but could be transferred, into cultivated quinoa.

Here we report on the morphological and physiological characterization of the response to heat stress in a sub-collection of sixteen wild and cultivated quinoa genotypes. Our preliminary results confirm superior heat stress tolerance of the wild relative, and pave the way to further in-depth molecular and genetic analyses to identify the underlying genetic basis for differences in tolerance to high temperatures.

Given the importance of quinoa as a crop for food security in the future, and the need to identify plant adaptation strategies as soon as possible to maintain our agricultural system in the context of adverse environmental and climatic conditions, this scientific work is of the highest priority for a more environmentally sustainable agronomical system in The Kingdom of Saudi Arabia. 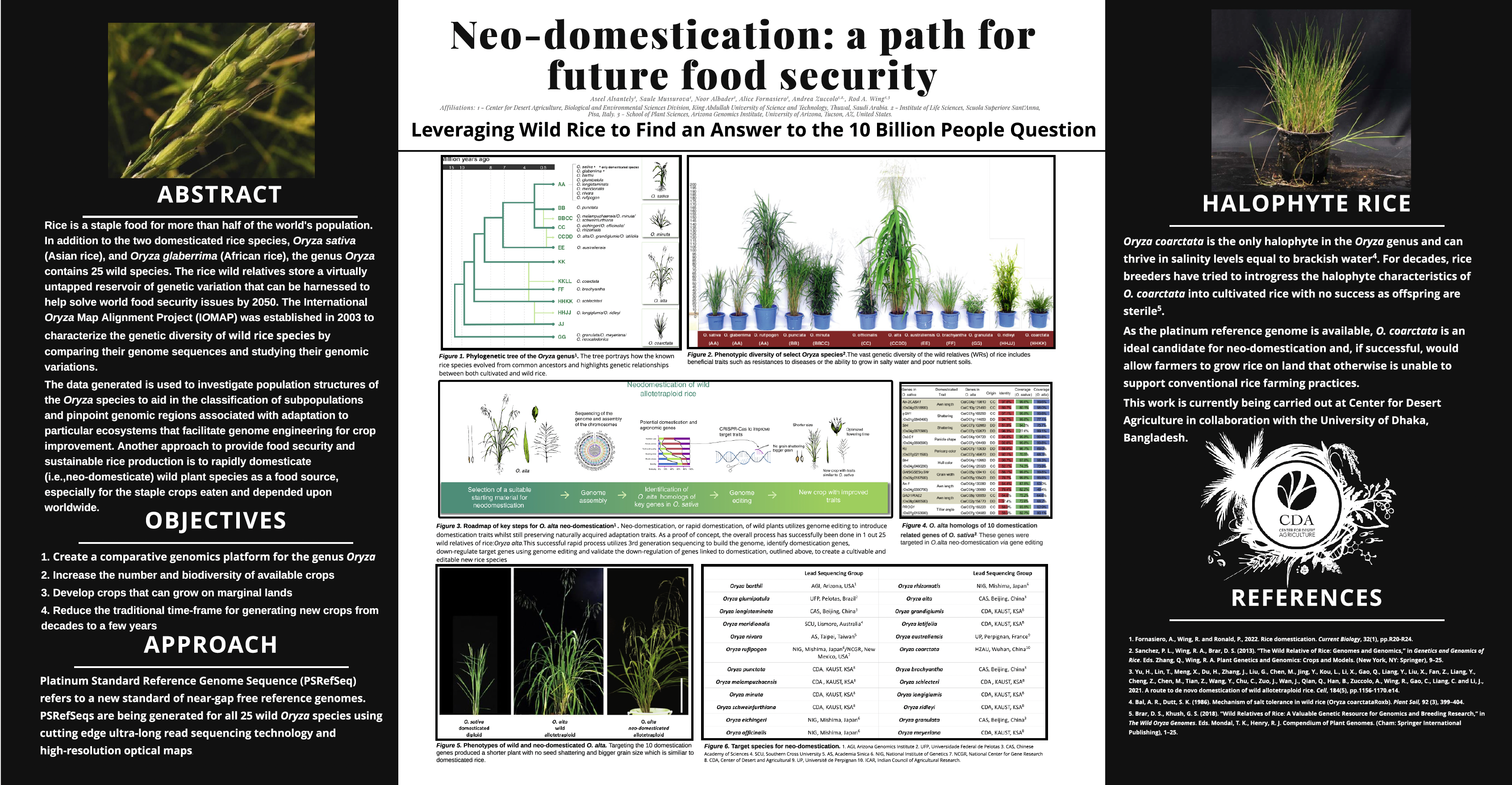 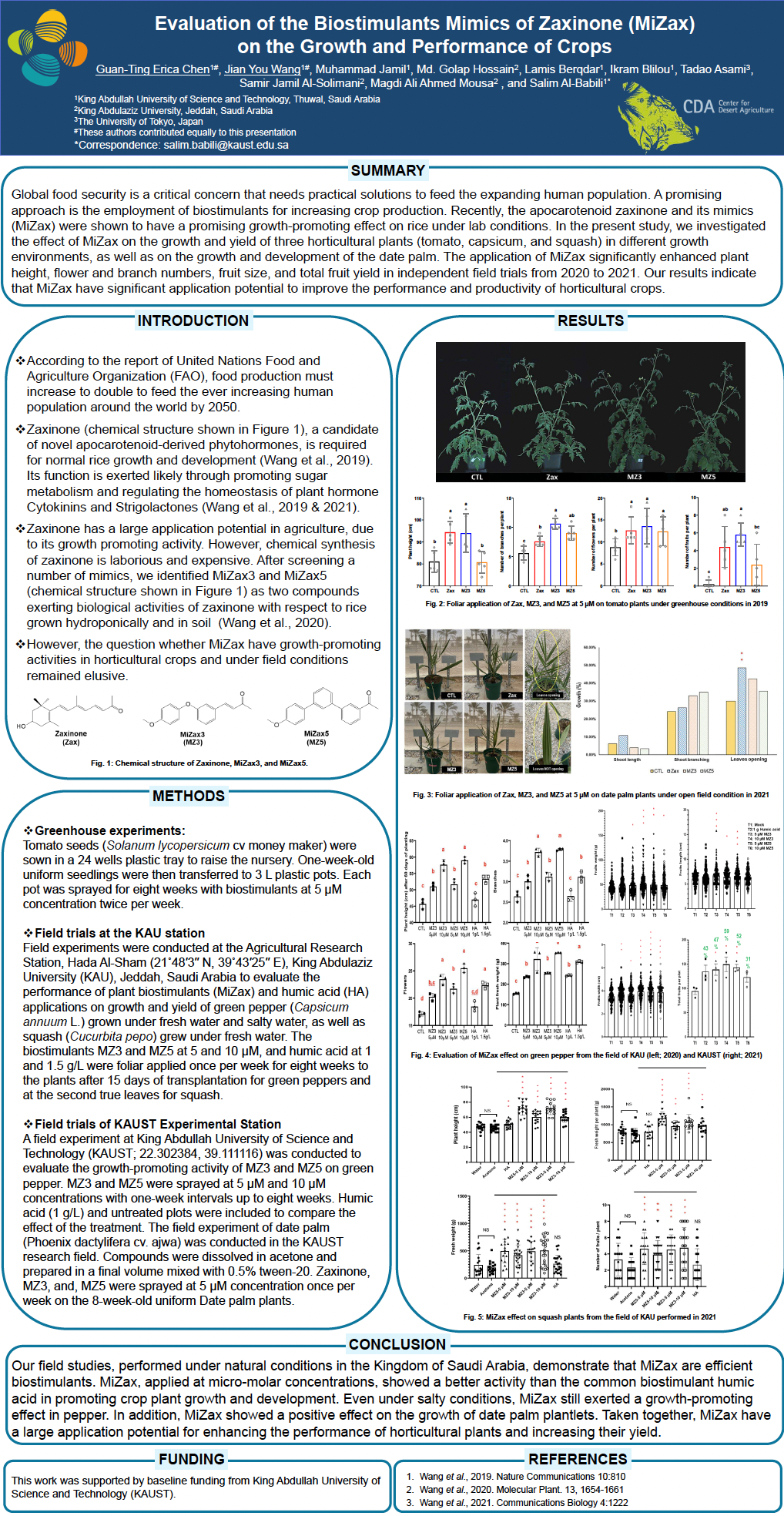 Global food security is a critical concern that needs practical solutions to feed the expanding human population before 2050. One of the tactics is to employ plant growth biostimulants for increasing crop production. Biostimulants are compounds that boost plant growth and performance, including the secondary metabolites apocarotenoids. Recently, the apocarotenoid zaxinone and its mimics (MiZax) show a promising growth-promoting effect in rice plants. In the present study, we investigated the effect of MiZax, under different growth environments, on three dicot horticultural plants (tomato, capsicum, and squash) as well as on the growth and development of the monocot date palm, an important crop in the Middle East. The application of MiZax significantly enhanced plant height, flower numbers, branches, fruit size, and total fruit yield in the independent field trials from 2020 to 2021. Furthermore, the applied MiZax amount was far less than the commercial compound humic acid. Our results indicate that the selected MiZax can be a potential candidate to improve horticultural crops performance and production.